Old maps publishing is an important part of the workflow which is being developed by our project. We would like to simplify this process as much as possible and that is why OldMapsOnline.org supported the development of the MapTiler application, which is in early beta now.

Once you have a georeference for your maps, MapTiler can greatly simplify the rest of the publishing process. It is as easy to use as Zoomify: it generates tiles from your maps and you just place those tiles on your web server in the same way you did with Zoomify tiles. 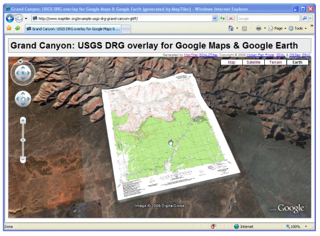 The main difference is that MapTiler can produce tiles which are compatible with Google Maps, Virtual Earth, Yahoo Maps and also with Google Earth for 3D presentation. You can use such tiles to overlay the satellite imagery in mashups, combine them together and create new map applications.

But you can go further. You can put on the map some placemarks, add search functionality, overlay other data or different raster maps etc. just by playing with the template and modify a bit the JavaScript code.

If you plan to create such mashups with map tiles you should read the Google Maps API documentation or alternatively you can use OpenLayers open-source project if you don't want to depend on a commercial company like Google. 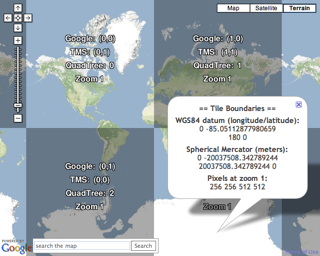 We have just released a new online tool which could be an excellent starting point for people who are interested in publishing raster maps as tiles and are already familiar a bit with Google Maps API. This tool can help you to understand how the tiling using Spherical Mercator works in Google Maps, Virtual Earth, Yahoo Maps, OpenStreeMap and other services. It shows you how the tiles are referenced and how they are stitched together in the web browser. It is part of MapTiler documentation.

It also contains all the math you might need to overlay your own geodata from external sources be it tiles pre-generated by Maptiler/GDAL2Tiles, MSR MapCruncher, tiles generated dynamically by WMS servers and cached by TileCache etc.

The online tool visualizing the tiles is available here:

BTW Some old maps were published with the beta version of the MapTiler/GDAL2Tiles already. Have a look at Historical Map Overlays from National Library of Scotland: http://geo.nls.uk/maps/.